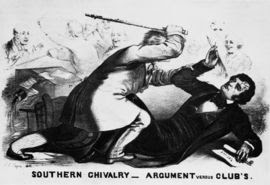 Representative Joe Wilson, of South Carolina, called the President of the United a liar tonight, while the President was in the House Chamber addressing a joint session of Congress. This isn't news to any of you; it was quite startling.

Shocking as this was, this wasn't the worst breach of civility a Congressman from South Carolina has ever committed. That dubious honor goes to his predecessor Preston Brooks.
I hereby nominate Congressman Wilson for the Preston Brooks Award, an irregular honor to be given to Members of Congress whose incivility undermines our civil institutions and the integrity of our public debate. May Wilson hold the award unchallenged for many years to come.

Preston Brooks, Congressman of South Carolina, walked into the Senate Chamber in 1856 and beat Senator Charles Sumner over the head with a cane. Sumner had to be carried from the chamber, unable to walk; he could not see because of the blood in his eyes; his desk was torn from its place on the floor when he took shelter under it. Brooks felt that Sumner had been discourteous in a floor speech, and beat Sumner because he felt the Senator had not been civil enough. Sumner was not well enough to resume his duties until 1859; the Massachusetts legislature actually returned Sumner to the Senate that time, because they felt that his empty chair in the Senate Chamber spoke more eloquently than any successor could do.

Brooks refused to apologize, survived an expulsion vote, resigned anyway (because he was affronted that anyone would impugn his character by voting for his expulsion) and was re-elected as a triumphant hero by his constituents. In the sectionalism leading up to the Civil War, Sumner was treated as a martyr in the north, and Brooks was lionized throughout the South. (There are towns named after him in Georgia and Florida.) And the Civil War came all the closer for it.

The beating was a sign of terrible sectarian division, and aggravated that division. But the partisan whooping and cheering that followed was a far worse sign, and in the long run even more corrosive. If the spirit of Preston Brooks moved another South Carolina Congressman tonight, in a small way, the question the rest of us have to ask is how we deal with it tomorrow. If all parties can agree that his behavior was out of place, then we're still having a healthy public debate. If, on the other hand, we see a backlash against criticism of Wilson, if the radio charlatans and cable shouting heads decide to defend him tomorrow, then it's a sign that out national discourse is fraying, and reasonable solutions are drifting further out of reach.

Charles Sumner's seat in the Senate Chamber stands empty again tonight. It is, of course, Senator Kennedy's seat. And tonight a sitting President ended his speech to both Houses and our nation by appealing to the eloquence of that empty chair, and of its sorely-missed occupant. There's poetry in that, but chance and history wrote the poem.
Posted by Doctor Cleveland at 11:15 PM