All statues, like all politics, are local. They're about the place where they are put up, and they change that place (which is to say, they're political). It's a mistake to think a statue is put up to represent some eternal truth; they're a local statement about the politics of the moment. So it is with Christopher Columbus, who got statues and a national holiday for political, and progressive reasons. Those statues don't seem progressive anymore, for a simple reason: they worked. So they've outlived their purpose.

Columbus Day, and the statues of Columbus all over America, were introduced in the 2oth century in order to promote immigrants' rights. Italian immigrants, and Italian-Americans born in this country, were despised as perpetual foreigners, looked down upon as unassimilable and un-American. They weren't the only immigrant group treated this way, but they stood in for the larger group of Southern and Eastern European immigrants that nativists hated, and they were conspicuously despised. They certainly didn't count as white people in the first half of the 20th century. Elevating Columbus was part of a larger campaign to assert that immigrants were Americans, too. After all, "America" is an Italian word.

And it worked. Italians, like the Poles and Lithuanians and Portuguese, have been promoted to the full privileges of American whiteness. The category has expanded to include them, which means the borderline of racism had been moved.

And regressive approaches to immigration worked too. The first laws limiting immigration were passed in the 20th century to keep out the Italians, specifically, along with the Poles, Greeks, Czechs, and so on. The flow of immigration from Eastern and Southern Europe was choked to a trickle, and over the decades after that those immigrant groups lost touch with their home countries. Being Italian American now is its own thing, heavily diluted and even at its purest divorced from Italian culture. Virtually no American Italians today speak the languages their immigrant ancestors did, regional Italian dialects that no American college teaches. (What one learns in an American university is the artificial national language created for reasons of other, strictly Italian, politics. Your great-grandmother didn't actually talk like that.)

And plenty of Italian Americans, at this moment in history, have gone over to the anti-immigrant politics that would have once kept them from being born in America. A large slice of Trump's base comes from white ethnics descended from immigrants themselves, people who show up in most polling as "white Catholics." Look at Rudy Giuliani spitting bile on cable. The Italian Americans no longer need help. We arrived a long time ago.

And now that the America's racist imaginary is focused on the border with Latin America, and on despising Latinx as permanent foreigners, Columbus comes to symbolize an anti-immigrant agenda that the people who lobbied for his statues and holiday never intended: a celebration of European colonization by Spain. The reversal of the original intent is just ghastly.

So arrivederci, Colombo. I'm done with you. We don't need you, and you're not helping. My people weren't from Genoa anyway. Anything I have to say to you I can say in Sicilianu, the handful of words that have come down the generations. But all of those words are obscene. 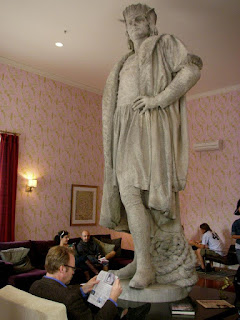 Posted by Doctor Cleveland at 10:28 PM