Batman, of course, is a character who is a lunatic vigilante, and so some crazy people identify with that fantasy figure in the wrong way. Batman is also a character who has lost his parents to senseless gun violence. (They were killed on a family outing to the movies.) It's an authoritarian vigilante fantasy about stopping people from shooting each other.

The Batman character is a reflection of our country: its fascination with violence and lawlessness, but also its desire to escape from the bloodshed. What makes Batman most peculiar is that he, the ultimate American vigilante, wants absolutely nothing to do with guns.

Bruce Wayne is crazy. But not so crazy that he thinks guns make things better. And when it comes to guns, we're still not as rational as the fictional character who dresses up like a bat. 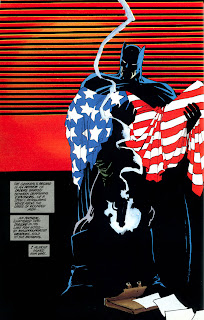 Posted by Doctor Cleveland at 10:44 AM