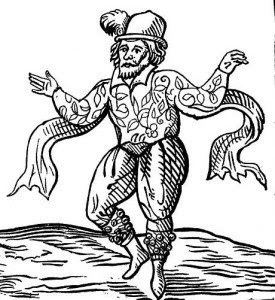 I'm going to avoid blogging about partisan politics today, and write a bit about theater history (which is what I'm often doing when not blogging).

The gentleman above is the great clown William Kempe, acting partner of William Shakespeare. We can confirm that he played Dogberry in Much Ado About Nothing and Peter, the foolish servant, in Romeo and Juliet. He was the company's primary clown until around 1599. And he was an enormous star: much bigger, in the early days, than Shakespeare was. (The picture above is from his ill-conceived solo career after he broke up with Shakespeare, Burbage, and the boys. If that seems like a huge mistake, remember that no one had an agent to talk sense to them.)

Kemp was a master of physical comedy and dance. His extended comic jigs after the ends of plays were famous. And for one reason or another, one of his signature bits was throwing his shoe at people onstage. People could not get enough of this; throwing the shoe evidently slayed the crowd every time. It operated something like the pie in the face did later.

Of course, a lot of Elizabethan comedy seems impenetrable from the distance of four hundred years. Why anyone would laugh at someone throwing his shoes at someone else is a mystery that I can only leave you, Dear Reader, to resolve on your own.
Posted by Doctor Cleveland at 5:56 PM

i find that it really depends on the shoe.